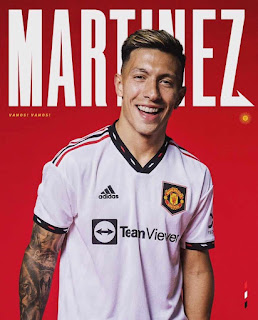 Manchester United Complete Signing of Martinez for £57m. Lisandro Martinez has declared his desire to help Manchester United fight for titles after being unveiled as the Premier League side’s newest signing. The Argentina international agreed a transfer to United from Ajax worth £46.5 million ($53m) earlier this month, though that could rise to £57m ($68m) depending on add-ons.

Martinez was officially revealed as a United player on Wednesday with a video posted on social media, during which he donned their 2022-23 home jersey for the first time.

Martinez has also told United’s official website that he is excited to reunite with his former Ajax coach Erik ten Hag and believes they can enjoy success in England.

“It’s an honour to join this great football club. I’ve worked so hard to get to this moment and, now that I’m here, I’m going to push myself even further,” he said.

“I’ve been lucky enough to be part of successful teams in my career and that’s what I want to continue at Manchester United. There will be a lot of work to get to that moment, but I firmly believe that, under this manager and coaches, and together with my new team-mates, we can do it.