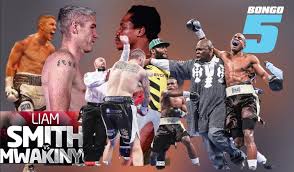 Smith wants world title shots and blockbuster high-profile name fight nights, whichever comes his way first as he prepares to return to the ring against Mwakinyo on Saturday night.

The 34-year-old is riding the momentum of impressive wins over Anthony Fowler and, most recently, Jessie Vargas in New York having been dealt a setback in defeat to Magomed Kurbanov in Russia back in May 2012.

The Merseyside fighter will be looking to get back into world title contention with a win over Tanzania’s Hassan Mwakinyo who poses a significant threat to Smith . Mwakinyo is known for his hard – hitting punches and already knows what it takes to win in enemy territory after stopping Sam Eggington in his hometown of Birmingham in 2018 .

With Smith and Mwakinyo being two fighters who are not afraid to go toe – to toe and let their hands go, this fight could be one to remember on Merseyside.

Here’s everything you need to know about Smith vs. Mwakinyo.

WHEN IS SMITH VS. MWAKINYO ? DATE , START TIME

The main card is set to get underway at 7 p.m. BST / 2 p.m. ET with the main event ringwalks scheduled for 10 p.m. BST / 5 p.m. ET . These timings could change due to the length of the undercard fights .

WHAT CHANNEL / STREAM IS SMITH VS. MWAKINYO?

How to watch Liam Smith vs. Hassan Mwakinyo

Smith vs. Hassan Mwakinyo will be broadcast live on Sky Sports Arena, which will be showing the whole card from 7pm BST.

Sky Sports Main Event will also be showing the later stages of the card, starting at around 9.30pm BST.

WHERE IS THE SMITH VS. MWAKINYO FIGHT?

The fight will be taking place at the M & S Bank Arena in Liverpool.